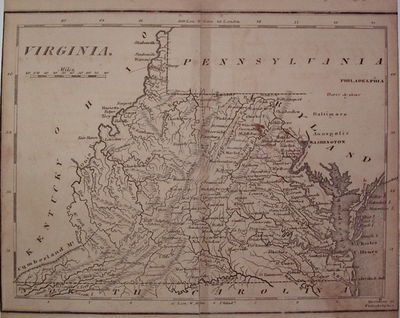 by CAREY, Mathew
Philadelphia: Carey, Mathew, 1813. unbound. very good. Map. Uncolored engraving. Image measures 5.75" x 7.5". Charming early double page map of Virginia. Shows towns, major routes, waterways and topographical details. From "Carey's American Pocket Atlas", which was originally published in 1796. Minor offsetting and scattered staining. Cropped margins. Mathew Carey (1760-1839) was an Irish-born American publisher, bookseller, and economist, as well as one the most important figures of early American cartography. Carey was based in Philadelphia, where he apprenticed for Benjamin Franklin before establishing his own book shop and publishing firm. He is credited with publishing the first American atlases, producing some of the best quality maps and most informative depictions of the United States in the early period after it gained independence. (Inventory #: 203729)
$300.00 add to cart or Buy Direct from
Argosy Book Store
Share this item

Boston with Charlestown and Roxbury