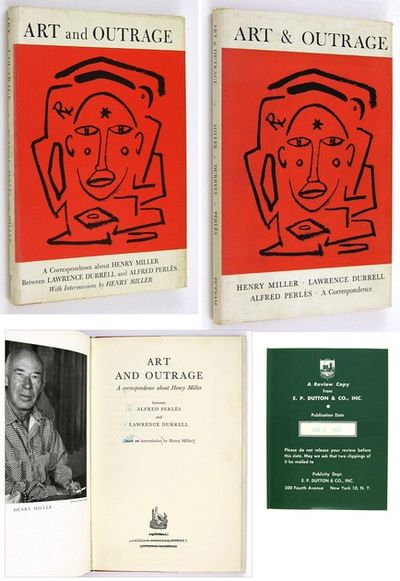 by MILLER, Henry
London/NY: Putnam/Dutton. 1959/1961. A review copy of the American edition, consisting of the true first (British) edition, copyedited on the title page and front flap to reflect changes to be made in the American edition, with a pencil note on the front flyleaf about the projected change in size. With review slip laid in. Correspondence about Miller between Lawrence Durrell and Alfred Perles, with interjections by Miller. Miller met both Durrell and Perles in Paris in the Thirties. Dusty top edge; fine in a very near fine dust jacket. Together with a copy of the American edition, as issued. Fine in a fine dust jacket. Unless otherwise noted, our first editions are first printings. First Edition. Hardcover. Fine. (Inventory #: 027323)
$115.00 add to cart Available from
Ken Lopez - Bookseller
Share this item