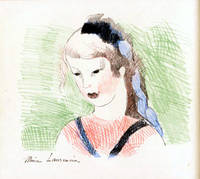 by [Black Sun Press]: Carroll, Lewis [pseud. of C.L. Dodgson]
Paris: The Black Sun Press, 1930. Oblong small quarto. Half dark blue morocco and decorated boards, gilt extra, with geometric rules and angular diagonal panels reaching from the foretips into the approximate center of the boards, and with a small white morocco rabbit inlaid into the upper side-panel of the spine, t.e.g. While the binding is unsigned, it is characteristic of Bennett Studios. Light rubbing at tips, else a fine copy, enclosed in a matching morocco faced board slipcase with repaired splits at joints and some chipping to the extremities. First edition in this format. Illustrated with six original color lithographs, signed in the plate, by Marie Laurencin, printed by Desjobert of Paris. From a total edition of 790 copies, this is one of fifty copies on Japan vellum (of 420) for distribution in the United States. The famous Laurencin lithographs benefit significantly from their appearance on Japan vellum in this uncommon issue, which does not suffer from the foxing that frequently defaces the copies on paper. The binding is similar to that appearing on a small but observable number of copies of the US issue executed by Bennett, perhaps at the instigation of the US distributor. MINKOFF A39. MONOD 2304. (Inventory #: WRCLIT57739)
$4,000.00 add to cart or Buy Direct from
William Reese Co. - Literature
Share this item

RUSSIA. "By A Manchester Manufacturer" ...

Edinburgh, London, Manchester & Dublin : William Tait [et al] , 1836
(click for more details about RUSSIA. "By A Manchester Manufacturer" ...)
View all from this seller>