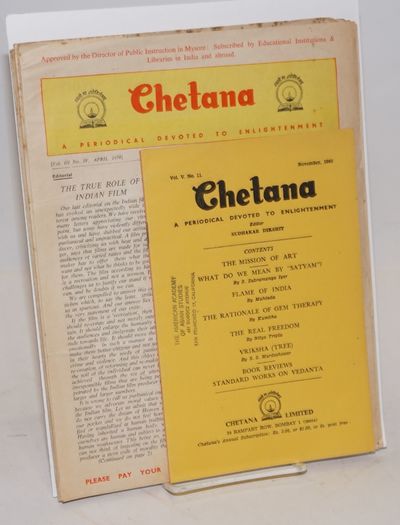 by Dikshit, Sudhakar, editor
Bombay: Chetana Limited, 1960. Seven issues of the monthly Vedanta journal; included are issues from April 1958, January, March, April and September 1959, and October and November 1960. The latter two are 15p., 5.5x8.5 inch stapled pamphlets (bearing rubberstamps of the American Academy of Asian Studies), while the earlier issues are 8.5x11 inches on heavily foxed paper, between 8 and 16 pages. Contents include articles by various Swamis (Madhavtirtha, Tattvananda, etc) and other writers on primarily Hindu but also some Buddhist and spiritualist themes. (Inventory #: 129206)
$25.00 add to cart or Buy Direct from Bolerium Books
Share this item