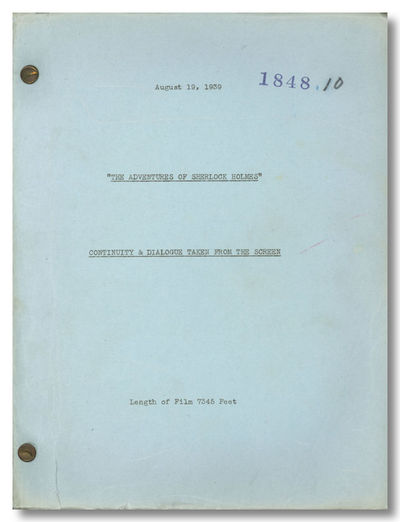 by [Doyle, Arthur Conan (source work)]: Blum, Edwin, and William Drake [screenwriters]
[Beverly Hills]: Twentieth-Century-Fox Film Corporation, 1939. [1],132 leaves. Quarto. Mimeographed typescript, printed on rectos only. Bradbound in mimeographed studio wrappers. One inch closed tear at lower edge of upper wrapper, filing number stamp on upper wrapper, short tear at spine, otherwise very good or better. A combined continuity and dialogue script for the 1939 film adaptation of William Gillette's play, directed by Alfred Werker, and starring Basil Rathbone and Nigel Bruce, produced by Darryl F. Zanuck. Although well over one hundred and fifty adaptations of Sherlock Holmes to the screen are known, beginning with SHERLOCK HOLMES BAFFLED (1903), the Rathbone-Bruce portrayals have become almost canonical, beginning with THE HOUND OF THE BASKERVILLES (March 1939), and concluding with the twelfth in sequence, DRESSED TO KILL (1946). The film ran eight reels, for a total of 7345 feet. Original scripts for any of them, even continuity scripts, are uncommon. DE WAAL 5147. (Inventory #: WRCLIT41712)
$2,500.00 add to cart or Buy Direct from
William Reese Co. - Literature
Share this item