Essay, in answer to the following question . . . Together with 6 other papers by Kirwan . . . 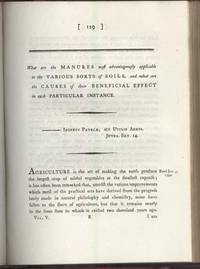 by Kirwan, Richard
Dublin: George Bonham, for the Academy, 1794. Kirwan, Richard (1733?-1812). (1) Essay, in answer to the following question . . . "What are the manures most advantageously applicable to the various sorts of soils, and what are the causes of their beneficial effect in each particular instance?" In Transactions of the Royal Irish Academy 5 (n.d. [1794]): 129-198. (2) A comparative view of meteorological observations made in Ireland since the year 1788, with some hints towards forming prognostics of the weather. In ibid: 3-29. (3) Reflections on meteorological tables, ascertaining the precise signification of the terms Wet, Dry, and Variable. In ibid.: 31-38. (4) State of the weather in Dublin from the 1st of June 1791 to the 1st of June 1793. In ibid.: 39-50. (5) Examination of the supposed igneous origin of stony substances. In ibid.: 51-81. (6) Meteorological observations made in Ireland in the year 1793. In ibid.: 227-242. (7) Experiments on a new earth found near Stronthian in Scotland. In ibid.: 243-255. Whole volume, 4to. xvi, [2], 324, [2], 92, [2], 63, [1], 4pp. 7 plates. 261 x 197 mm. Half calf, marbled boards c. 1794, front hinge cracking, one corner bumped. Light dampstaining on some leaves and plates, otherwise very good. First Edition. An important early contribution to agricultural chemistry. Kirwan's analysis of fertilizers suitable to different soils, first published in this volume of the Transactions of the Royal Irish Academy, was issued in book form in 1796 and went through numerous editions in both England and America. The Irish chemist Kirwan is known for his experiments on the specific gravities and attractive powers of various saline substances, which formed a substantial contribution to the methods of analytical chemistry, and earned him the Copley Medal from the Royal Society in 1782. Kirwan is also known for his pioneering work in meteorology, some of which is discussed in the meteorological papers contained in this volume: "From records of Irish weather covering forty-one years, compiled by John Rutty, [Kirwan] worked out a system of probabilities with a view to forecasting the weather for seasons ahead. His predictions were more often right than wrong and were much valued by farmers; though the sequences he observed have not persisted in Ireland, methods of autocorrelation similar to Kirwan's are today proving successful elsewhere" (Dictionary of Scientific Biography). Kirwan's also wrote on geology, disputing the igneous nature of basalt, taking issue with Hutton's uniformitarian theory of the earth, and publishing an early report on the element strontium, discovered in 1790. This volume of the Transactions of the Royal Irish Academy also contains a paper by George Graydon, "On the fish inclosed in stone of Monte Bolca" (pp. 281-318), illustrated with several striking engravings of fossil fish. . (Inventory #: 40387)
$1,500.00 add to cart or Buy Direct from
Jeremy Norman & Co.
Share this item
Jeremy Norman & Co., Inc.
Offered by