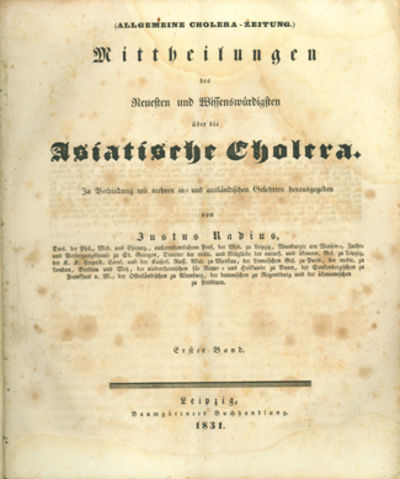 by Radius, Justus
Leizpig: Baumgartner, 1831. Complete Run of a Weekly Cholera Newspaper Radius, Justus (1797-1884), ed. Allgemeine Cholera-Zeitung. Mittheilungen des Neuesten und Wissensw¸rdigsten uber die Asiatische Cholera. Erster [-funfter] Band (all published). 4to. 5 vols. in 1, variously paginated. Leipzig: Baumgartners Buchhandlung, 1831-32. 248 x 207 mm. Marbled boards c. 1832, a little worn, small splits in hinges. Minor foxing & browning, but very good. First Edition of the entire run of Radius's weekly cholera newspaper, published during the second cholera pandemic of the 19th century, which began in India in 1826 and by 1831-32 had extended via trade routes to Europe, Great Britain and America. "Cholera was the classic epidemic disease of the nineteenth century, as plague had been for the fourteenth" (quoted in Spink, Infectious Diseases, p. 162); it has been described as "the sanitarian's best friend" (Spink, p. 164), since fear of cholera did more to stimulate the growth of public health and sanitary reform during the 19th century than any other communicable disease. Radius's newspaper includes descriptions of cholera outbreaks in different European cities and in America, lists of books and articles on cholera, articles on the medical and public health aspects of the disease, etc. Scarce-NUC NA 0189361 and OCLC cite runs of the Allgemeine Cholera-Zeitung in only four North American libraries (Harvard, U. Mich., NLM and Coll. Phys. Phila.) Kirchner, Die Zeitschriften des deutschen Sprachgebietes, 9769. (Inventory #: 33713)
$1,750.00 add to cart or Buy Direct from
Jeremy Norman & Co.
Share this item
Jeremy Norman & Co., Inc.
Offered by