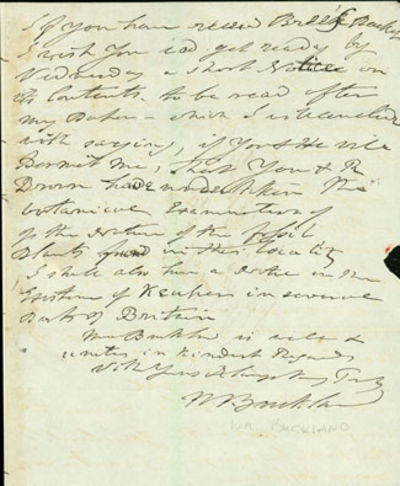 by Buckland, William
1836. Buckland, William (1784-1856). Autograph letter signed to Charles Stokes (1783-1853). N.p., 27 Oct. 1836. 3pp. 228 x 187 mm. Small marginal lacuna where seal was broken, light dampstaining along central fold, seal reinforced with clear tape.. Letter with excellent scientific content from geologist and paleontologist William Buckland, founder of the Oxford school of geology and author of the best-selling Reliquiae Diluvianae (1823), which promoted a catastrophist version of Earth's history marked by "discontinuous assemblages of organic life being created and dying out" (Dictionary of Scientific Biography). Buckland's letter discusses a significant geological discovery-the relationship between the New Red Sandstone strata in England and in Chemnitz, Germany, based on samples of petrified wood found in both regions. "Many thanks for your letter rec'd at Bristol - I was sorry to miss you in the 1?2 day I was in London last week. I write to ask if you have rec'd from Revd. Mr. Bree of Allesley near Coventry some polished thin slices of silicified wood which he promised me to send up to you. I was at Allesley last week whither I have been longing to go for the last 10 years & have ascertained that the matrix from which the silicified wood in the gravel & on the surface of the fields of that district has been derived is the lower region of the New Red Sandstone - this discovery is very important in its relation to the equivalent strata near Chemnitz. " Chemnitz is the site of a Permian-era petrified forest, remarkable for its "outstanding three-dimensional preservation of particularly large fossil remains, made possible by siliceous permineralization, [which] provides the opportunity to study the gross morphology, anatomy and internal organization of plant tissues in a way not allowed by other preservational states" (Lucas et al., p. 8). Bree's samples from Allesley were apparently of a similar nature. " shall present a notice of my evidence of identification, to the Geol. Soc. next Wednesday & I shall be glad to transfer to yourself & Brown the examination & description of the nature of the fossil woods of Allesley. I recognized in Bree's collection which is very large, none of the palms and Dendrolites of Cotton and Sprengel all appeared to be nearer to Coniferae but in the greater no. the annular rings of growth were very obscure. If you have received Bree's packet I wish you wd. get ready by Wednesday a short Notice on its contents to be read after my paper which I concluded with saying, if you will permit me, that you & R. Brown have undertaken the botanical examination of the nature of the fossil plants found in the locality. . . ." "R. Brown" refers to botanist Robert Brown (1773-1858), best known for naming the cell nucleus and for being the first to observe the seemingly random movement of particles suspended in a liquid or gas - what we now call Brownian motion. Brown's investigations of the cellular tissues of fossilized woods are noted in Buckland's Geology and Mineralogy Considered with Reference to Natural Theology (1836), published the same year this letter was written. Rev. William Thomas Bree (1786-1863), vicar of All Saints' church in Allesley, was a noted observer of all aspects of natural history who wrote many articles and letters on local plants, insects and bird life, a large number of which were published in Loudon's Magazine of Natural History between 1829 and 1837. Buckland's correspondent was Charles Stokes, a stockbroker and amateur geologist who collected specimens of petrified wood. Buckland stated in his letter that he would present his "notice of my evidence of identification" to the Geological Society on the following Wednesday (Nov. 1); however, he did not do so until December 14 (see Proceedings of the Geological Society of London 2 [1838]: 439). Buckland's paper, titled "On the Occurrence of Silicified Trunks of Large Trees in the New Red Sandstone Formation of Poikilitic Series, at Allesley, near Coventry," was followed by "Further Notice on a partially Petrified Piece of Wood from an Ancient Roman Aqueduct at Eilsen, in the Principality of Lippe-Buckeberg," by Stokes. Lucas et al., "Non-Marine Permian Biostratigraphy and Biochronology: An Introduction," Geological Society, London, Special Publications 265 (2006): 1-14. (Inventory #: 40462)
$2750.00 add to cart or Buy Direct from
Jeremy Norman & Co.
Share this item
Jeremy Norman & Co., Inc.
Offered by