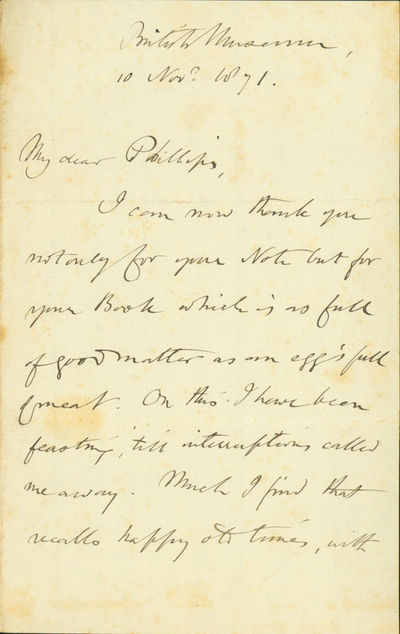 by Owen, Richard
London, 1871. "Happy old times with dear old Buckland, when we were groping our way." Owen, Richard (1804-92). Autograph letter signed to John Phillips (1800-1874). [London], British Museum, 10 Nov. 1871. 4pp. 180 x 113 mm. Light spotting, but very good. To Owen's old friend John Phillips, reader in geology at Oxford University, who had sent Owen a copy of his Geology of Oxford and the Valley of the Thames (1871). "I can now thank you not only for your Note but for your Book which is so full of good matter as an egg's full of meat. On this I have been feasting, till interruptions called me away. Much I find that recalls happy old times, with dear old Buckland, when we were groping our way. If I live to finish, & you to see, the Vol. on Australian fossils I promise you an early copy: I think it is likely to be the first opportunity I may have of returning you anything in kind . . ." Owen refers here to geologist and paleontologist William Buckland (1784-1856), author of Reliquiae diluvianae (1823) and of the first full account of a fossil dinosaur (1824). Buckland's support had been crucial to the advancement of Owen's career in the 1830s and 1840s. The "Vol. on Australian fossils" refers to Owen's Researches on the Fossil Remains of the Extinct Mammals of Australia, which he was then in the midst of writing; the work was published in 1877-78. John Phillips, the recipient of this letter, was the nephew and pupil of geologist William Smith (1769-1839), whose "Delineation of the Strata of England and Wales with part of Scotland"(1815) was the first large-scale geological map of any country. . (Inventory #: 40454)
$1,500.00 add to cart or Buy Direct from
Jeremy Norman & Co.
Share this item
Jeremy Norman & Co., Inc.
Offered by