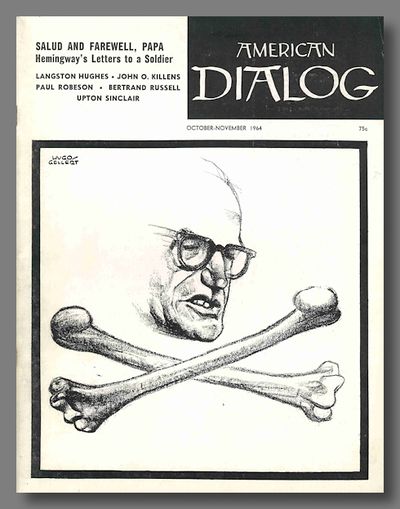 by [Hemingway, Ernest, et al]
New York, 1964. Volume one, number two. Quarto. Pictorial wrappers (a caricature of Goldwater by Hugo Gellert). A bit dusty and lightly rubbed, but very good or better. Edited by Joseph North and Walter Lowenfels, with a very distinguished roster of sponsors. A timely, progressive periodical, working "for a fruitful union of all who work in the realm of ideas to achieve the peace of the world, democracy in our own land, and the material and spiritual betterment of our people." Contributors include Hughes, Robeson, B. Russell, Upton Sinclair, an article about Hemingway by Joseph North, and some previously unpublished letters by Ernest Hemingway to Milton Wolff, of the Abraham Lincoln Brigade. The first number appeared in July/August, and publication ceased in 1972. HANNEMAN C424. (Inventory #: WRCLIT48996)
$30.00 add to cart or Buy Direct from
William Reese Co. - Literature
Share this item

PHYSIOLOGICAL EXPERIMENTS, AS APPLIED TO DIGESTION, ALIMENTATION, AND NUTRITION. TOGETHER WITH MATTER OF THE HIGHEST IMPORTANCE TO PRACTITIONERS

New York : The Maltine M'F'G Co. , 1885
(click for more details about PHYSIOLOGICAL EXPERIMENTS, AS APPLIED TO DIGESTION, ALIMENTATION, AND NUTRITION. TOGETHER WITH MATTER OF THE HIGHEST IMPORTANCE TO PRACTITIONERS)
View all from this seller>