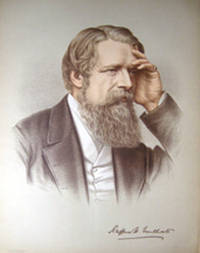 by (Right Hon. Sir Stafford Northcote, M.P.)
London: Cassell & Co. Ltd., 1890. A good likeness in colors of Right Hon. Sir Stafford Northcote, M.P.; lithographed from a photograph "...taken by the London Stereoscopic Company"; with a facsimile signature below; paper 8" x 11" sheet approx. overall; Stafford Henry Northcote, first earl of Iddesleigh (1818-1887) British politician, "...he was jointly responsible for one of the best-known and most typical social reforms of the century, was a financier of note, and loyally served two great tory leaders, being responsible in some measure for the success they enjoyed. Although no tory democrat in social policy, he was a genuine philanthropist. In retrospect it is clear that the very solidity Northcote represented did much to facilitate the growth of the Conservative Party at that time and its evolution into the normal British party of government. As much as any well-known tory leader, Northcote personified the mainstream of the Conservative Party which, under leaders like Stanley Baldwin and Harold Macmillan, has regularly been preferred by the electorate. Another judgement of Lord Blake's, that Northcote was a born second in command (Blake, Disraeli, 545), seems especially apt, although this may understate his true contribution to the success of his party." (W. D. Rubinstein, in the DNB); this image from the series of biographical portraits in "The Modern Portrait Gallery..." 1st series, by this publisher; light wear; portrait of the important British politician and financier in very good condition. . Very Good. (Inventory #: 19911)
$20.00 add to cart or Buy Direct from Certain Books
Share this item
Certain Books
Offered by

Nails the Inside Story of an Amazin' Season

by Dykstra, Lenny with Marty Noble

September 3, 1922 Balieff's Chauve-Souris Program Given in the Garden of the Parrish Art Museum, Southampton, Long Island for the Benefit of the Rogers Memorial Library