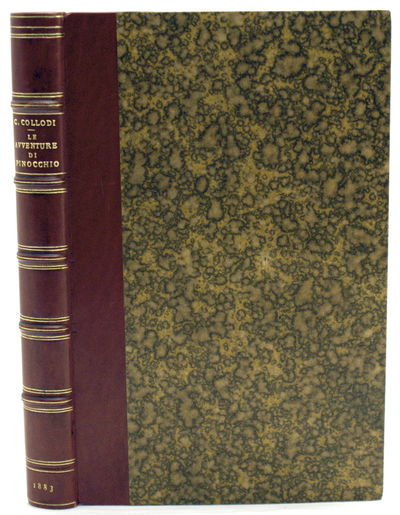 by Collodi, Carlo
Florence: Felice Paggi, 1883. Mazzanti, Enrico. Small octavo. 236pp., + iipp. of advertisements. First edition. The enduring children's classic about a mischievous marionette whose nose grows every time he tells a lie, in the original Italian and wonderfully illustrated with a full-page frontispiece of the titular character, as well as sixty-one additional woodcuts interspersed throughout the text. The first half of Pinocchio was originally published serially in the children's magazine Giornale per i Bambini from 1881 to 1883, and it is thought that the story was not intended primarily as children's literature, as it did not end happily: Pinocchio was hanged from a tree for his various moral failings. It was at the urging of his publisher that author Carlo Collodi (a pseudonym for Carlo Lorenzini) added the second half of the book, in which The Blue Fairy repeatedly comes to Pinocchio's rescue, guiding him toward self-awareness and enabling his transformation from puppet to human. Popular in Italy at the time of its publication, the book and its author went on to gain international acclaim when the story was translated into English in 1892. Pinocchio is still cherished to this day and has been the subject of numerous adaptations, including popular versions by Disney and Steven Spielberg, who used the story as the basis for his 2001 film AI. This very rare first edition of the book - only five copies have come up for auction in nearly twenty-five years - is bound in quarter red calf and marbled boards by Devauchelle. Raised bands divide the spine into compartments, two of which bear the title and date in gilt. The endpapers are marbled. Housed in a clamshell box with marbled boards and red leather backing, title and decorations on spine in gilt. Some toning and light staining to the interior, a small closed tear to the margin of two pages, and several unobtrusive stamped and handwritten ownership signatures, otherwise a fine copy of this high spot of children's literature. (Gottlieb/Pierpont Morgan Library 213; Osborne 2, p.1007). (Inventory #: 20920)
$35,000.00 add to cart or Buy Direct from
Bromer Booksellers
Share this item

Vancouver : A Lone Press , 1999
(click for more details about Francesco Griffo da Bologna: Fragments & Glimpses)
View all from this seller>