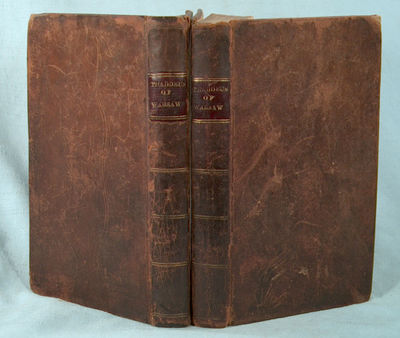 by PORTER, Jane
1809. PORTER, Miss [Jane]. THADDEUS OF WARSAW, 2 VOLUMES. Boston: Lemuel Blake, 1809. First American edition from the Fourth English edition. 307/296 pp. 12mo., calf with red gilt morocco spine labels. Front joints starting, moderate rubbing to boards and spines. Labels clear and only slightly dulled. Contemporary small printed bookplates to front pastedowns; ink ownership to front flyleaves. Some dampstaining to edges of pages, light to moderate foxing in the text and end matter. Porter's second work, preceded only by a children's story. A popular early effort in the historical novel genre (through twelve editions), it is based on the Polish independence movement of the late 18th century, and was lauded by the Polish patriot Kosciusko. Quite scarce. (Inventory #: 80224)
$1,500.00 add to cart Available from
Boston Book Company
Share this item