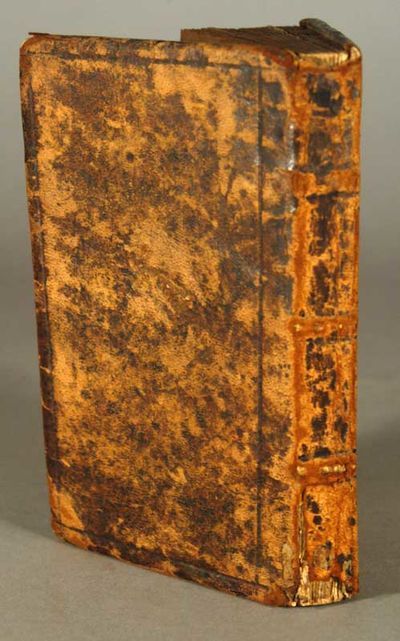 by FULLER, Thomas
1646. FULLER, Thomas. ANDRONICUS, or, the Unfortunate Politician. Shewing Sin; slowly punished, Right, surely rescued. London, Printed by WW for John Williams, 1646. 12mo. [88ff.] including final blank. Second edition, same year, same printer and publisher as the first. . The story of Andronicus I Comnenus (1118-1185), a brilliant Byzantine Emperor with a scandalous private life., written as a satire against Oliver Cromwell and his allies. Thomas Fuller (1608-1661), chaplain to the Royalist troops and, later, to Charles II, wrote many books of history and theology. His wit and intelligence helped him survive the Revolution, but he was imprisoned briefly. Toning from leather turn-ins to endpapers, first and final leaves.Rear endpaper cut in half lenthwise; wormed corner to front endpaper; hinges loose. The text is fine. Early leather worn. Inscribed in 1888 to John J. Ingalls, a Kansas abolitionist who served 18 years in the U.S. Senate. (This edition not in British Library. Nice association. Scarce. (Inventory #: 83062)
$625.00 add to cart Available from
Boston Book Company
Share this item