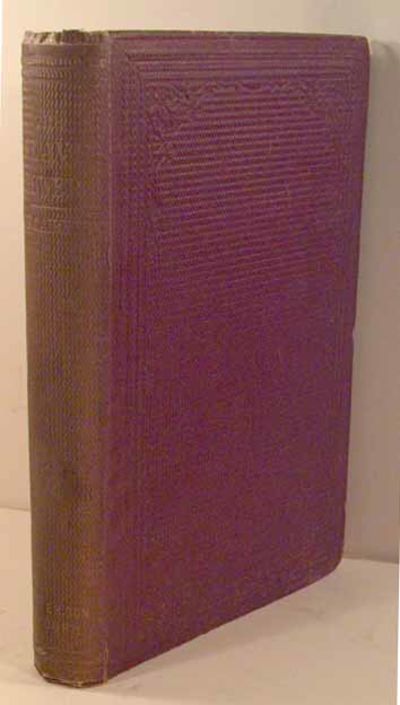 by CAIRNES, John Elliot
1862. CAIRNES, J. E. THE SLAVE POWER: ITS CHARACTER, CAREER, AND PROBABLE DESIGNS: BEING AN ATTEMPT TO EXPLAIN THE REAL ISSUES INVOLVED IN THE AMERICAN CONTEST. London: Parker, Son, and Bourn, 1862. First edition. Octavo. xviii,304 pp. Contemporary publisher's binding, with binder's ticket (Cavenagh of Dublin) at rear pastedown: red ribbed cloth, gilt-stamped spine title, yellow coated endpapers. Ex-library; bookplate at front pastedown and no other marks. Binding is sunned at spine and along bottom edge of lower board, with shallow loss at crown, and moderately soiled and rubbed all over. Light foxing to a few leaves at the beginning and at the end, else clean within. A solid copy, about very good overall. Cairnes was an Irish economist and an influential follower of J. S. Mill. This book, published just at the outbreak of the American Civil War, was written in response to criticism of John Stuart Mill's book On Liberty (London, 1859), and is dedicated to him. In this work, which established his reputation, Cairnes examines the economic basis of slavery and the moral and industrial fruits of the system, the general purposes of southern leaders and the meaning of the Civil War. It was a powerful defence of the northern states and the anti-slavery cause and made a great impression in England and America. A second edition ('greatly enlarged, with a new preface') appeared in 1863. (D.N.B., Sabin 9856, Larned 1852). (Inventory #: 74880)
$100.00 add to cart Available from
Boston Book Company
Share this item