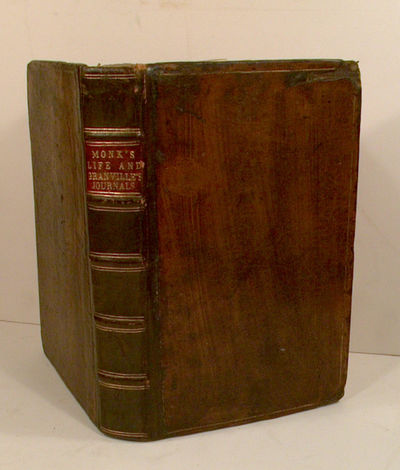 by ALBERMARLE, George Monck, Duke of
1724. [ALBERMARLE, George Monck, Duke of]. THE LIFE OF GENERAL MONK: DUKE OF ALBERMARLE, containing, I. A faithful account of his unparalledl'd conduct, surprizing actions, and providential success in accomplishing the restoration of monarchy. II. A particular relation of that most memorable march from Coldstream to London; the preparations for it in Scotland, and the happy consequences of it in England. III. Many mistakes committed by our historians, (particularly the Earl of Clarendon) concerning the General's administration, rectified. Publish'ed from an original manuscript of Thomas Skinner. M.D. With a preface in vindication of General Monk's conduct and giving some account of the manuscript. By William Webster... London: Printed for J. Graves ... J. Isted and J. Hooke, 1724. The second edition, corrected. Frontispiece portrait. Octavo. [10],lxvii [i.e. xlvii],385,[7] pp. Some pagination errors, but complete. (ESTC t113801). Bound with: GRANVILLE, John. TWO ORIGINAL JOURNALS OF SIR RICHARD GRANVILLE. Viz. I. A journal of the expedition to Cadiz in Spain, Anno 1625. With the charged delivered by the Earl of Essex, and nine other colonels, against the Viscount Wimbledon, general of that voyage. With his answer, containing a full relation of the defeat thereof. II. A journal of the expedition to the Isle of Rhee in France, Anno 1627. Containing an account of the most material passages, happening at, and after our landing there. London: Printed for John Clarke, 1724. First edition ("Now first published from their respective manuscripts"). Octavo. xiv,[2]56,[2],25 pp. (CBEL I, 771). Two titles bound as one. 19.7 cm. Worn contemporary calf boards skillfully rebacked (probably 19th c.) with a red lettering piece. Ink ownership on ffep. only partially readable due to a 1.5 cm hole. Clean texts. Sound and very good overall. (Inventory #: 79194)
$650.00 add to cart Available from
Boston Book Company
Share this item