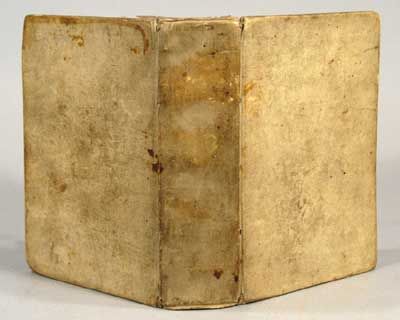 by CATS, Jacob
1740. CATS, Jacob. HUWELYCK, dat is, Het gantsche beleyt des Echten Staats; afgedeelt in zes hoost-stukken, [Marriage, or, the whole account of the wedded state, divided into six sections: maidenhood, courtship, the bride, the wife, the mother, the widow. Illustrated with life-like plates]. s'Gravenhage, Pieter van Thol, 1740. Octavo. [xxii]538pp. +[1]f. Contains approximately 36 engravings by Noach van der Meer, roughly based on Adriaen Van de Venne's illustrations for the first edition of 1625. Although smaller and simplified, they're finely rendered. This verse compendium of advice to young women was first published in 1625, and went into many editions until at least 1779. Jacob Cats (1577-1660), the beloved and prolific poet known as "Father Cats," was a jurist, statesman, and diplomat, and for fifteen years Raad-Pensionaris of Holland. With small marginal tears to pp. 39,84,108,183, and 411, small worm hole along inner margin of pp. 108-120, and small dampstain to corners of pp. 378-428, none of these flaws affecting the printed area. Two signatures slightly starting; and the folding plate of children's games torn 4" along the fold line. In early vellum, lightly soiled. Light to moderate foxing. This edition not in OCLC, BL, or NUC. (Inventory #: 81123)
$1,250.00 add to cart Available from
Boston Book Company
Share this item