His copies of three titles by and about Geoffrey Chaucer 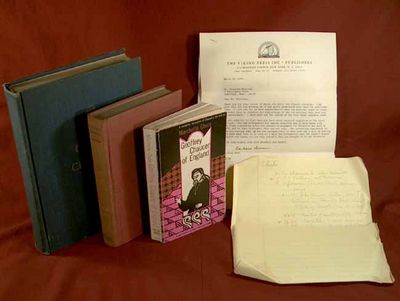 by MORRISON, Theodore
19. [MORRISON, Theodore. His copies of three titles by and about Geoffrey Chaucer, containing a few annotations, notes and some correspondence.] Morrison taught at Harvard University and was a director of the Breadloaf Writers' Conference. The material offered: 1. The Works of Geoffrey Chaucer. Second edition. Boston: Houghton Mifflin Company, (1957). Edited by F. N. Robinson, with an autograph gift card from him to Morrison laid-in. Bound in blue cloth which is sunned at spine and shows general wear. Also laid-in are three letters, one by Morrison and two addressed to him from the Viking Press, regarding payment of royalties for Viking's The Portable Chaucer, which was sellected, translated and edited by Morrison. 2. Geoffrey Chaucer and the Development of His Genius, by John Livingston Lowes. Boston: Houghton Mifflin Co., 1934. Notes by Morrison on the ffep. Bound in terra cotta cloth which is sunned at spine and shows general wear overall. 3. Geoffrey Chaucer of England, by Marchette Chute. New York: E.P. Dutton & Co., 1958. A Dutton Everyman Paperback which is skewed, worn along perimeters, and has a few sprung leaves. Laid-in are three pages of notes written on yellow legal paper. The price for the three books and enclosures:. (Inventory #: 78518)
$225.00 add to cart Available from
Boston Book Company
Share this item