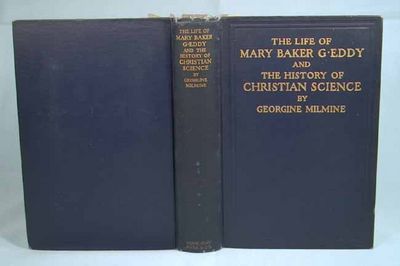 by CATHER, WILLA
1909. [CATHER, Willa]. THE LIFE OF MARY BAKER G. EDDY. AND THE HISTORY OF CHRISTIAN SCIENCE. By Georgine Milmine. Illustrated. New York: Doubleday, Page & Company, 1909. First edition, first printing. 8vo., blue cloth, stamped in gilt. First printed serially in McClure's magazine, for which Cather edited, reorganized and rewrote much of Milmine's work. The book, however, excludes those passages which can be attributed directly to Cather, though much of it, especially the later chapters, retains her journalistic style. The extent of this involvement, both in the magazine and final book form, still provokes much scholarly controversy. With some spotting to the spine and wear at heel and crown; it is slightly over-opened in one place, and the rear hinge is mended. Still, a very good copy. (Crane AAAI.ai). (Inventory #: 54062)
$200.00 add to cart Available from
Boston Book Company
Share this item