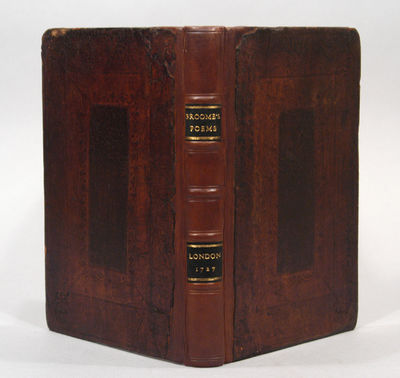 by BROOME, William
1727. Vertue, George. BROOME, William. POEMS ON SEVERAL OCCASIONS. London: Bernard Lintot, 1727. Octavo. xiii(3)248pp. First edition. Fine frontispiece portrait engraved by George Vertue. Three pages of publisher's ads. Broome, a country clergyman, contributed the notes to Pope's Iliad (1715-20), and wrote eight of the 24 Books of "Pope's" translation of the Odyssey, published in 1725-6, as well as the Notes. He felt he received insufficient credit or payment for his work, and Samuel Johnson (in Lives of the Poets) said there was "more than coldness" between him and Pope. Facing the first page of text here is Broome's rather caustic "Advertisement:" "The Author has not inserted into this Collection any part of his translation of the Odyssey, published by Mr. Pope: he thought it an Imposition on the Public to swell this volume with Verses taken from a Work that is in the hands of almost every Reader." Johnson quoted a comic verse current at the time: "Pope came off clean with Homer, but they say/ Broome went before and kindly swept the way." Pope lampooned Broome in The Dunciad and Bathos. Johnson called Broome an "excellent versifyer, his lines smooth and sonorous, his diction select and elegant," but admitted that he was not a great poet. Tipped-in on the flyleaf is a description of another copy of this edition from a Sotheby's catalogue of 1870, copied out in longhand. Contemporary calf boards, skillfully rebacked with black morocco spine labels. Scarce. (Inventory #: 73091)
$975.00 add to cart Available from
Boston Book Company
Share this item