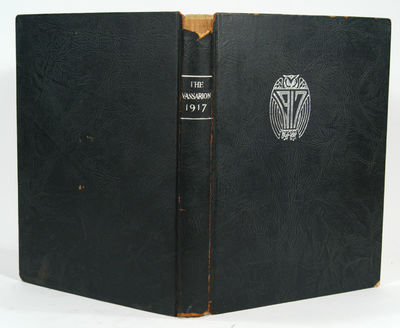 by MILLAY, Edna St. Vincent
1917. MILLAY, Edna St. Vincent. "THE PATIENT PERIODICAL," in THE VASSARION, Volume Twenty-nine. Poughkeepsie, NY: Vassar College, 1917. Illustrated. Small quarto. Two parts bound as one: 204,[28]; 55,[1] pp. Black paper with a simulated leather texture, title printed in white on spine, an owl device which incorporates the year is stamped in silver gilt on upper board. Vassar-designed bookplate with student signature, a member of the class of 1918, on recto of frontispiece. Binding is sound though chipped at crown, superficially rubbed along joints, and worn through just at the tips of corners. Text and photos are clean. This is the Vassar College yearbook for the class of 1917. Printed on p. 59 are the lyrics to "The Patient Periodical," Millay's winning entry in the Class Song Contest of 1916 for which she wrote both the words and music. Millay's senior portrait appears on p. 80; and there is an informal picture of her on p. 27 of the second part in which she is identified as Vincent, her familiar name. Millay's name also appears as a member of the Tree Ceremonies Committee (p. 53), as a cast member of "The Locked Chest" (p. 122), and as President of the Spanish Club (p. 168). Millay, a scholarship student at Vassar, began her studies at the age of twenty-one. While there, she studied literature and languages, and wrote and appeared in several plays for college productions. She had trouble obeying the rules and regulations meant to protect young Vassar students and was very nearly barred from graduation but for the intervention of faculty and students. After garduation, and before the year had ended, Millay began her successful and very public career by publishing Renascence and Other Poems and moving to New York City. (Inventory #: 81280)
$750.00 add to cart Available from
Boston Book Company
Share this item