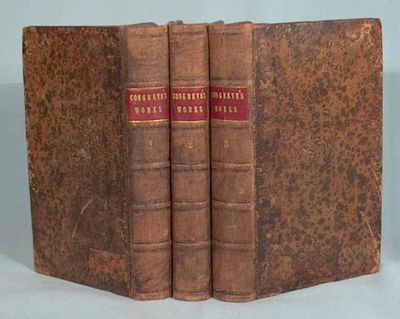 by CONGREVE, WILLIAM
1730. CONGREVE, WILLIAM. THE WORKS OF MR. WILLIAM CONGREVE: IN THREE VOLUMES, Consisting of his Plays and Poems. London, J. Tonson, 1730. 12mo. Three volumes. Fifth edition, complete. Contains The Old Batchelor, The Double Dealer, Love for Love, The Mourning Bride, The Way of the World, The Judgment of Paris, Semele, and Poems on Several Occasions. Published one year after the author's death. This collected edition first appeared in 1710, when the Preface stated that its publication had been hastened because "these five Plays have lately undergone a spurious Impression, and have been very faultily, as well as very indirectly Published, in Prejudice both to the Author and to the Bookseller who has the Property of the Copy. In the Third Volume there is an Opera [Semele], which has never yet appear'd; of which there is little to be said in this place, but that that the Musick is excellently compos'd by Mr. John Eccles." Semele was never performed until 1743, when Handel composed the score which is still performed. Internally fine, in contemporary mottled calf boards, nicely rebacked with red lettering-pieces. Light wear to extremities. (Inventory #: 76915)
$425.00 add to cart Available from
Boston Book Company
Share this item