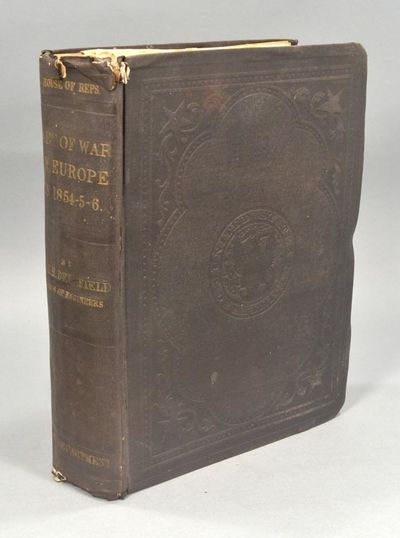 by DELAFIELD, Richard
1860. DELAFIELD, Richard. REPORT ON THE ART OF WAR IN EUROPE IN 1854, 1855, AND 1856. By Major Richard Delafield, Corps of Engineers, from his notes and observations made as a member of a "Military Commission to the Theater of War in Europe," under the orders of the Hon. Jefferson Davis, Secretary of War. Washington: George W. Bowman, Printer, 1860. Issued by the 36th Congress, 2nd Session, House of Representatives, Ex Doc., First edition. Profusely illustrated with engraved and lithographed plates, maps and diagrams, and an additional title-page, which is illustrated and lithographed in color. There are numerous plates and figures mostly bound at the end of the volume; many of these are folding plates, maps of diagrams and in good condition as they have likely never been unfolded.. Some plates show light wear and foxing; and there is some foxing in the text. Thick 4to.: xvi, 277 pp., Original cloth, some nicks and tears. A little foxing, soiling but overall a very good and serviceable copy, with spectacular illustrations of fortifications around Europe, including Russia, particularly at Sebastopol. (Inventory #: 84324)
$425.00 add to cart Available from
Boston Book Company
Share this item