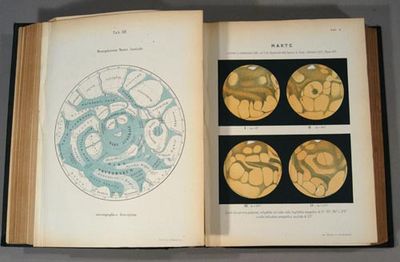 by SCHIAPARELLI, Giovanni Virginio
1878. SCHIAPARELLI, G. V. "OSSERVAZIONI ASTRONOMICHE E FISICHE SULL'ASSE DI ROTAZIONE E SULLA TOPOGRAFIA DEL PIANETA MARTE: fatte nella Reale Specola di Brera in Milano coll'equatoriale di Merz durante l'opposizione del 1877." First printing. Contained in Atti della R. Accademia dei Lincei, Anno CCLXXV, 1877-1878. Serie Terza. Memorie Della Classe Di Scienze Fisiche, Matematiche e Naturali. Volume II. Roma: Coi Tipi del Salviucci, 1878. Illustrated with five lithographs, including a double-page areographic map, a map of the southern hemisphere, and a color plate showing four views of Mars. pp. 308-439. Text and plates are clean and fresh, although lightly toned at edges. Thick 4to. (1145 pp.) bound in green pebbled cloth, with series title stamped at spine. Small chips at crown and the lower joint is just starting; light soiling overall. During the great opposition of Mars in 1877 Schiaparelli observed the planet thoroughly using a Merz refractor; this exceptional instrument allowed Schiaparelli to detect even the smallest surface features which had been overlooked in earlier oppositions by larger telescopes. In drawing a complete picture of the areographic positions of the fundamental points for the construction of an accurate map, he stated that the interpretation of the phenomena observed on Mars was still largely hypothetical, varying among observers even when they saw the same details. He was the first to classify the features as "seas" and "continents." (But it was Secchi who first used the term "canal" in his observations of 1859.) Although Schiaparelli understood that the features he observed on Mars were stable, he was cautious in drawing conclusions on the nature of the surface of the atmosphere until he could establish that the seas, continents, and canals were identifiable with analogous terrestrial forms. (DSB). (Inventory #: 65161)
$2,500.00 add to cart Available from
Boston Book Company
Share this item