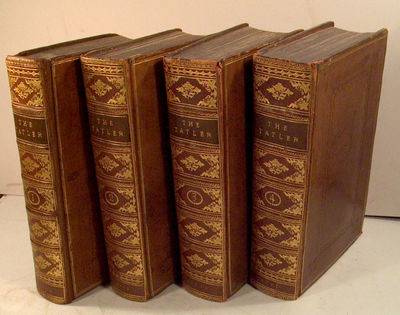 by STEELE, Richard
1710. (STEELE, Richard. THE TATLER). THE LUCUBRATIONS OF ISAAC BICKERSTAFF ESQ. London, Charles Lillie and John Morphew, 1710-11. Four volumes. First collected edition. Contains all 271 issues of Richard Steele's witty periodical, with essays and commentary on the life of the day, published from April, 1709 to January, 1711. Among the contributors were Joseph Addison and Jonathan Swift. Steele borrowed the pseudonym "Isaac Bickerstaff" from a literary joke played by Swift. The binder inserted the final issue, in which Steele reveals his true identity, at the beginning of volume IV, rather than at the end. Contemporary blind-panelled calf boards, handsomely rebacked with six gilt panels and raised bands to spine. Some light foxing to volumes I and II, otherwise internally fine; light wear to extremities, and tiny chip to spine head of volume III. First edition of a milestone in the history of the British essay, in a lovely binding. (Inventory #: 76887)
$975.00 add to cart Available from
Boston Book Company
Share this item