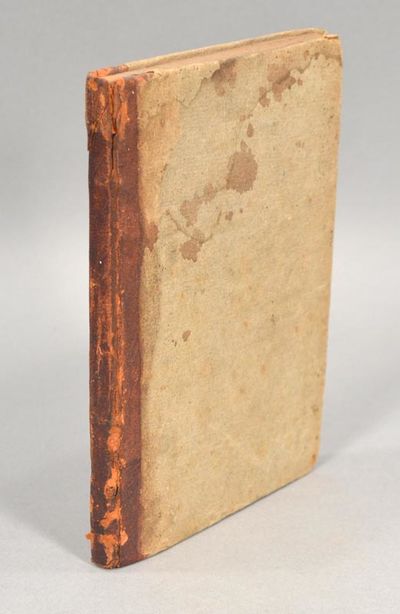 by ROSS, Robert
1794. [ROSS, Robert]. THE AMERICAN LATIN GRAMMAR: OR, A COMPLETE INTRODUCTION TO THE LATIN TONGUE. Formed from the most approved Writings in this Kind; as those of Lilly, Rudiman, Phillipps, Holmes, Bp. Wettenhall, Cheever, Clarke, Reed, &c. Originally compiled by the late President Burr, revised and corrected, in former Editions, by the late President Finley, and others; and now republished for the Use of the Grammar Schools throughout the United States. Providence (RI): Carter and Wilkinson, 1794. 12mo.: 136 pp. Worn contemporary binding; leather-backed paper boards. Leather is rubbed and starting at crown; boards are somewhat soiled . Small ink stamp on front pastedown. A wonderful crisp printing (though the text leaves are age-browned) and a perfect example of books of the time, as the wooden board is slightly visible at the margin of the rear pastedown. A later edition of this popular Latin grammar, its condition is very good. (Evans 27639; Sabin lists several editions, nos. 73398-73404, but not this one). (Inventory #: 83076)
$275.00 add to cart Available from
Boston Book Company
Share this item