FORUS FEASA AR EIRINN or A COMPLETE HISTORY OF IRELAND 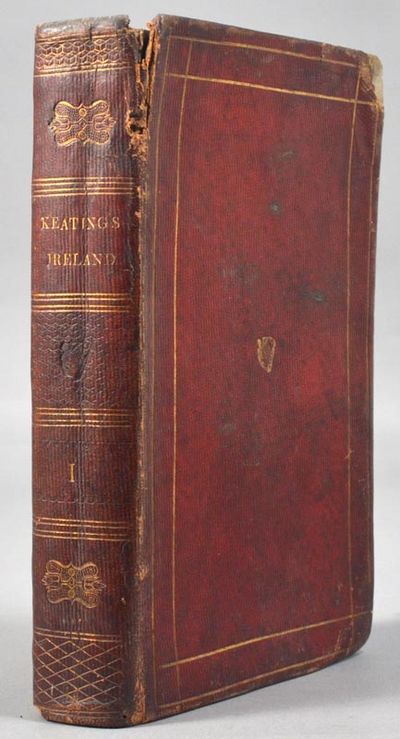 by KEATING, Jeoffrey
1811. KEATING, Jeoffrey. FORUS FEASA AR EIRINN/A COMPLETE HISTORY OF IRELAND, FROM THE FIRST COLONIZATION OF THE ISLAND BY PARTHALON, TO THE ANGLO-NORMAN INVASION; COLLECTED AND ARRANGED FROM THE MOST ANCIENT RECORDS OF IRELAND, AND FROM AUTHENTIC FOREIGN WRITERS. VOL. I. Dublin: John Barlow, 1811. xxvi + [v] - 415 pp. 8vo., contemporary dark red textured leather stamped in gilt, spine darkened to maroon. Spine chipped at heel, crown and front joint; corners bumped, light soil and rubbing to boards. Armorial bookplate to marbled endpapers. Folding map torn along two folds, one of which is repaired on reverse with paper. Life of the author prefaces the text. Occasional foxing; text is lightly age-toned. With Index. Keating (1570-1644) wrote Forus Feasa ar Eirinn in 1633-1636; it was translated into Latin, and into English (badly) in 1723, reprintred in 1809 and 1854; the original remained untranslated until Haliday produced Volume I only in 1811 (the volume in hand). It was finally translated into a four volume version in 1902-14 by David Comyn and P. S. Dineen. This is Haliday's first (and only) volume of his translation; in Irish with English translation on the facing rectos. Good. Rare. (Inventory #: 84871)
$950.00 add to cart Available from
Boston Book Company
Share this item