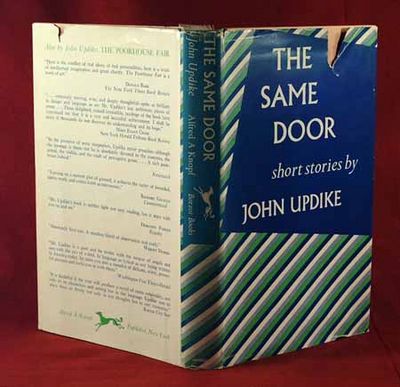 by UPDIKE, John
1959. UPDIKE, John. THE SAME DOOR. Short Stories. New York: Alfred A. Knopf, 1959. First edition. Bookplate of the Philips Exeter Academy, noting that the volume was presented to them by Alfred A. Knopf, Jr. (Cancellation stamp to bookplate). 8vo., turquoise cloth-backed brown paper-covered boards. Sun to top edge with a variable depth of 1/4 to 1" of the board affected; Internally, bright and clean. A very good, tight copy overall, in spine-sunned dust jacket with light general edgewear, a small chip to the rear panel and a larger chip to the front panel, which also bears a hint of soil. (Inventory #: 61061)
$250.00 add to cart Available from
Boston Book Company
Share this item