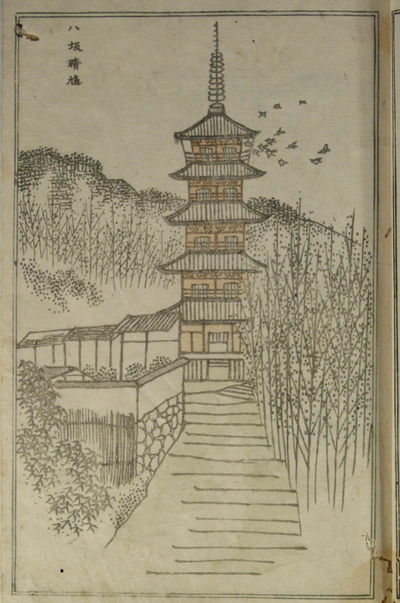 by (EHON) Kawamura Bumpô, artist
1809. [Ehon] Kawamura Bumpô, artist. TEITÔ GAKEI ICHIRAN. Osaka & Kyoto: Morimoto Tasuke (O), Chojiya Genjiro (K), Yoshida Shimbei (K) 1809 - [1816] 4 volumes. 25.5 x 16.5 cm. This set is identical to the Mitchell copy (p.518,519), save for the following: 1) There is no separate ad page before the colophon at the end of volume two; 2) Most of the poems in volumes three are sealed, while the Mitchell copy's were not. 3) Chojiya Genjiro replaces Ogawa Tazaemon of Osaka as second publisher in volume two. 4) The format of the colophon in volume four is almost identical to that of volume two and is dated 1809, including an ad for all three volumes of BUMPO GAFU as being in production, hence the ad had to be after 1813. Ogawa Tazaemon is listed as the second publisher. In any case, Chojiya Genjiro appears to have published some other Bumpô titles (see Mitchell/Ryerson). This is a handsome printing, particularly of the final two volumes, of intermediate age (late 1820s?, early 1830s?) The first two volumes are lovely as well and printed in a "Bunka style" and coloration. In addition, the covers, though apparently original and consistent (vols 1&2 and 3&4 are identical) do not appear to have been published at the same time, i.e., these books don't appear to have been issued as a mid-century four volume set (as most sets seen in the market appear to be). A few images have a color block or two missing, but overall quite handsome and effective. There has been a theory advanced that Chojiya Genjiro had not been involved with Bumpô's books until after 1837 [Ellis Tinios of Leeds in Print Collector's Quarterly, 9/94] - this set would seem to indicate a slightly earlier involvement. In a 20th century clasped chitsu case. The condition of the books with original title labels is quite clean. (Inventory #: 83418)
$1,100.00 add to cart Available from
Boston Book Company
Share this item