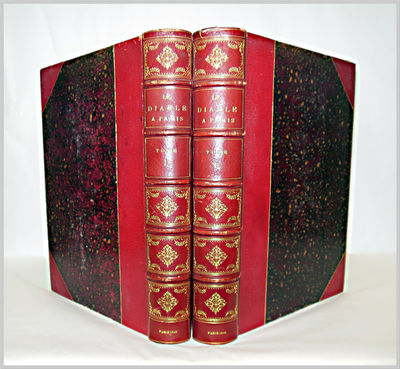 by [Gavarni, Paul (i.e. Sulpice Guillaume Chevalier)] Balzac, Honore, et al.
Paris: Publie par J. Hetzel, 1845. Two volumes. Thick quarto. 19th century three quarter crimson morocco, raised bands, spines gilt extra, t.e.g. Profusely illustrated with plates and vignettes in text, the large majority being after drawings by Gavarni. Very shallow snag at crown of one spine, light occasional rubbing at edges, otherwise a large, generally clean, largely untrimmed set. First editions of this ambitious undertaking, featuring contributions by Balzac, Sue, Sand, Stendahl, Musset, Nodier, Gautier, Nerval, and many others, preceded by a general history of the city by Theophile Lavallee. The over two hundred wood-engraved plates are based on Gavarni's drawings, and Ray lauds them as being "of even greater interest than the 320 wood engravings of his OEUVRES CHOISIES...The engraving is superior for the most part, and they are new conceptions, not versions of his lithographs...His designs make LE DIABLE A PARIS the culmination of the Romantic tradition of DIABLERIE, which began with the lithographic albums of the 1820s. It is also the last of the big books of collaborative illustration." RAY 236. CARTERET III:203-7. (Inventory #: WRCLIT29295)
$650.00 add to cart or Buy Direct from
William Reese Co. - Literature
Share this item

The Burial Service," contained in NIGHTWATCHMAN