MR. CHARLES HAWTREY IN A CINEMATOGRAPH VERSION OF A MESSAGE FROM MARS by Richard Ganthony ... Adapted from the Play and Produced by Mr. J. Wallett Waller .. 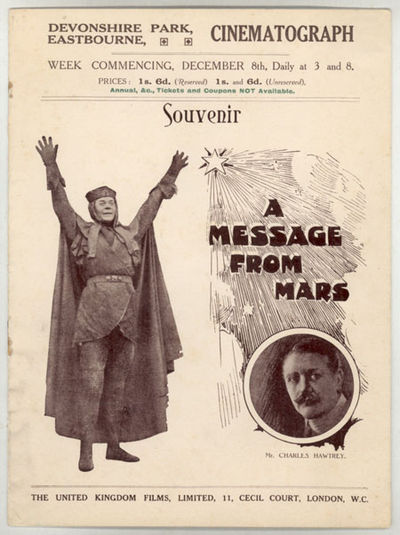 by (Ganthony, Richard)
London: The United Kingdom Films, 1912. Octavo, pp. [1-8] (not paginated), original pictorial wrappers. First edition. This popular play by Richard Ganthony about a visitor with superhuman powers from Mars, first performed in 1899, was filmed and released in 1912. This 8-page "souvenir" booklet includes numerous stills from the film and a one-page synopsis. A novelization of Ganthony's play by Mabel Winifred Knowles writing as "Lester Lurgan" was published by Greening in 1912. See Locke, Voyages in Space 135. Rear wrapper a trifle dusty, else a near fine copy. Rare. The Currey-Ordway-Currey copy; we know of no others. (#66890) (Inventory #: 66890)
$750.00 add to cart or Buy Direct from L.W. Currey
Share this item
L.W. Currey Inc.
Offered by