THE GIANT'S GATE: A STORY OF A GREAT ADVENTURE .. 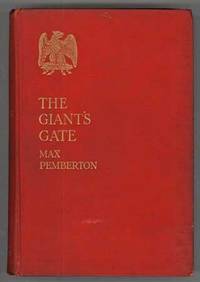 by Pemberton, Max
London, Paris, New York & Melbourne: Cassell and Company, 1901. Octavo, pp. [i-v] vi-viii [1] 2-360 + 8-page and [16]-page publisher's catalogues, both dated "8.01," inserted at rear, original decorated red cloth, front and spine panels stamped in gold, fore and bottom edges rough-trimmed, endpapers decorated with Cassell archer device printed in gray. First edition. Novel of political intrigue, apparently inspired by l'Affaire Dreyfus, set in France where factions plot to destroy the Republican government and restore the Empire. The marginal SF element, crucial to the plot, is the invention of an advanced submarine that will restore the glory of the military if the French government secures the prototype and an agreement to construct a fleet of underwater craft. Moskowitz, Strange Horizons, pp. 33-4. See Suvin, Victorian Science Fiction in the UK, p. 201. Not in Bleiler (1948; 1978) or Reginald (1979; 1992). Cloth a bit soiled, still a bright, tight, very good copy. An uncommon book. (#109318) (Inventory #: 109318)
$100.00 add to cart or Buy Direct from L.W. Currey
Share this item
L.W. Currey Inc.
Offered by