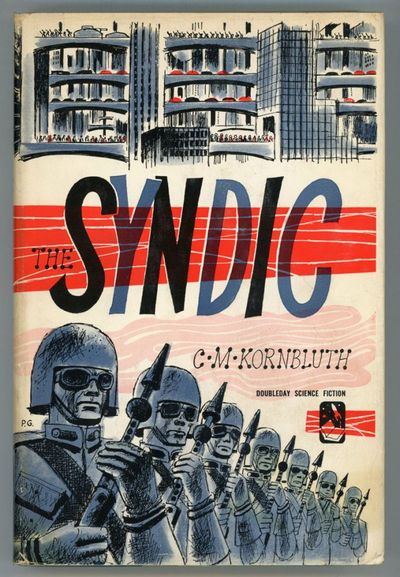 by Kornbluth, C[yril] M.
Garden City: Doubleday & Company, 1953. Octavo, boards. First edition. "A very different reading of the New York underworld from that of the GODFATHER. In a future New York, the Syndic has evolved into a free, highly permissive society, with what used to be 'protection' functioning as a mild form of taxation. Chicago's mob is quite the opposite, a brutal police state. A U.S. government-in-exile on the Irish coast complicates the picture. Faced with all these menaces, the Syndic is told by the hero that it must prepare for war and, in violation of its permissive principles, institute a military draft. But its genial philosopher-king refuses on the ground that the Syndic would then no longer be the Syndic. Kornbluth at his wickedly fun-poking best." - Anatomy of Wonder (2004) II-612. Survey of Science Fiction Literature V, pp. 2211-14. A nearly fine copy in very good, bright dust jacket with light wear at spine ends and two corner tips and several small internal tape reinforcements that do not show through on outer surface. (#73689) (Inventory #: 73689)
$100.00 add to cart or Buy Direct from L.W. Currey
Share this item
L.W. Currey Inc.
Offered by