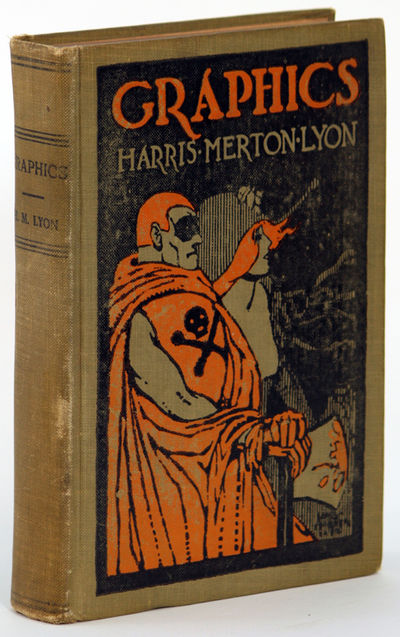 by Lyon, Harris Merton
St. Louis: William Marion Reedy, 1913. Octavo. pp. [1-8] [1-2] 3-319 [320: blank], original pictorial gray cloth, front panel stamped in orange and black, spine panel stamped in black. First edition. The second and last of Lyon's two books, both collecting some of his short fiction. Lyon's untimely death at age 33 cut short a promising literary career. His fiction was of high caliber and has been favorably compared with that of Stephen Crane and Ambrose Bierce. "The 31 tales and sketches in [SARDONICS and GRAPHICS] can be properly compared with the work of Crane and Bierce for vivid, highly characterized and purposeful narrative. 'The Second Motive' in SARDONICS and 'Revenge' in GRAPHICS are psychological murder tragedies at the two extremes of the social scale. Lyon, like Crane and Norris, died before his talents had fully matured and, unfortunately, when his work had only begun to appear in McCLURE'S MAGAZINE and to attract special attention." - Bennett, A Practical Guide to American Book Collecting, p. 204. Most of the stories in GRAPHICS (a collection dedicated to Joseph Conrad) are mystery or detective shorts, some with fantastic elements. "The Wind in the Lilacs" and "A Book in a Running Brook" contain short fairy tales with talking objects. "Ask and It Shall Be Given" features a blind boy who asks for the return of his sight on Christmas; an angel appears and gives him the ability to see into the hearts of people and this leads to an acceptance of his condition. Another Christmas story, "The 2000th Christmas," is set in the future and features a mysterious young Jew who possesses magical abilities and whose visit may constitute the second coming. "These stories of the straitened lives of people, most of them poor but a few rich, alternate between bleak cynicism and pietistic sentiment." - Robert Eldridge. Smith, American Fiction, 1901-1925 L-614. Hubin (1994), p. 519. Previous owner's bookplate affixed to front paste-down. Edges of text block dusty, mild bump to lower edge, some general light rubbing, small tear to cloth at upper right rear corner, a very good copy. (#126025) (Inventory #: 126025)
$125.00 add to cart or Buy Direct from L.W. Currey
Share this item
L.W. Currey Inc.
Offered by