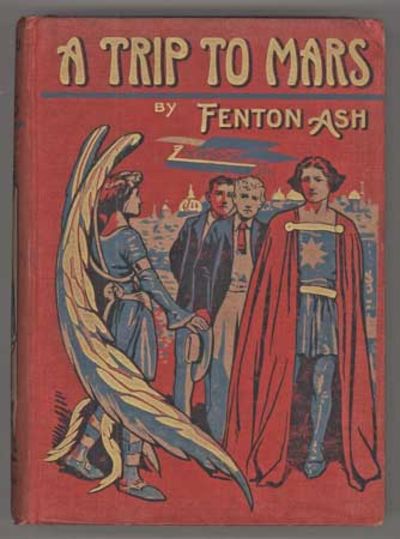 by Atkins, Francis Henry, writing as "Fenton Ash.
London, Edinburgh: W. & R. Chambers, 1909. Octavo, pp. [1-8] [1] 2-318 [319: printer's imprint] [320: blank], six inserted plates with color illustrations by W. H. C. Groome, original pictorial red cloth, stamped in blue, cream, black and gold, slate coated endpapers. First edition. "Two boys who save the life of a visitor from Mars (who turns out to be the planet's king) are abducted to that planet, where they have various adventures and help to suppress a revolt. The story is a simple variation on the theme of "A Son of the Stars," which had been serialized in YOUNG ENGLAND in 1907-1908, but it is not a sequel thereto. Its most original feature is the spaceship used to transport the heroes, a compound or the organic and inorganic that qualifies as an early cyborg." - Anatomy of Wonder (2004) II-40. Bleiler, Science-Fiction: The Early Years 82. Clareson, Science Fiction in America, 1870s-1930s 025. Clute and Nicholls (eds), The Encyclopedia of Science Fiction, p. 70. Locke, Voyages in Space (2011) V101. Locke, A Spectrum of Fantasy, p. 23. Bleiler (1978), p. 11. Reginald 00629. Prize label affixed to verso of frontispiece. Faint staining along fore-edge of rear cover, touch of sunning to spine panel, a very good copy. A bright copy of this very attractive Edwardian juvenile interplanetary novel. (#109272) (Inventory #: 109272)
$1,000.00 add to cart or Buy Direct from L.W. Currey
Share this item
L.W. Currey Inc.
Offered by