THE MAN WHO ROCKED THE EARTH .. 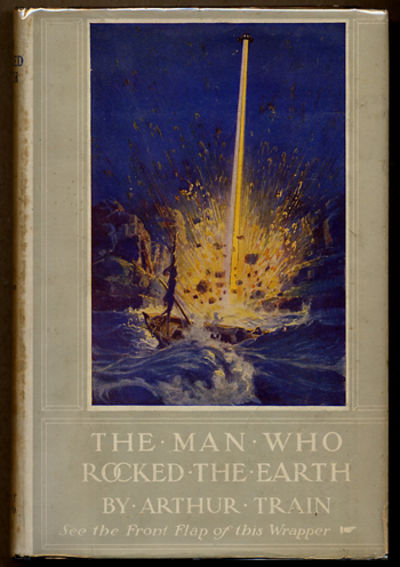 by Train, Arthur [Cheney] and Robert W[illiams] Wood
Garden City: Doubleday, 1915. Octavo, pp. [1-4] [1-2] 3-228, inserted frontispiece with color illustration by Walter L. Green, original pictorial dark blue cloth, front panel stamped in lavender, black and gold, spine panel stamped in gold, pictorial endpapers. First edition. An early atomic war novel, originally published as a serial in the SATURDAY EVENING POST, 14-28 November 1914. "The near future course of WWI is interrupted by messages from a mysterious PAX threatening super scientific punishments if war is not stopped. After some demonstrations, featuring rays, a flying ship and atomic energy, the nations obey." - Clute and Nicholls (eds), The Encyclopedia of Science Fiction (1993), p. 1236. "Unusual in early science-fiction in paying heed to correct science. Many of Wood's scientific details are still valid, although the extrapolations from them are, of course, fantastic." - Bleiler, Science-Fiction: The Early Years 2199. "Indebted to Wells's THE WORLD SET FREE of a year earlier, to which [the novel] explicitly refers." - Brians, Nuclear Holocausts: Atomic War in Fiction, 1895-1984, p. 326. Anatomy of Wonder (1976) 2-147; (1981) 1-159; (1987) 1-91; and (1995) 1-91. Clareson, Science Fiction in America, 1870s-1930s 754. Locke, A Spectrum of Fantasy, p. 214. In 333. Bleiler (1978), p. 195. Reginald 14210. Mild rubbing to spine ends and corner tips, a near fine copy in very good four-color pictorial dust jacket with age-darkened spine panel and some mild edge wear and rubbing; the stunning front panel illustration (reproducing Green's color frontispiece) is bright. A nice example of this scarce jacket. (#111958) (Inventory #: 111958)
$850.00 add to cart or Buy Direct from L.W. Currey
Share this item
L.W. Currey Inc.
Offered by