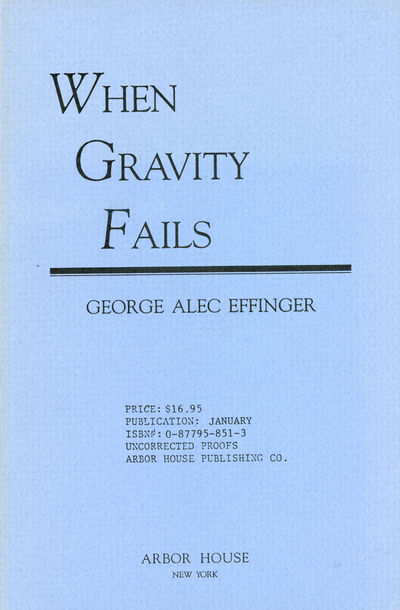 by Effinger, George Alec
New York: Arbor House, 1987. Octavo, printed light blue wrappers. Advance copy (uncorrected proof) of the first edition. "Marid, a small-time hood, is a citizen of the Budayeen, the red-light district of an unnamed twenty-first century Arabic city. He is also something of an anomaly; virtually all of his friends and acquaintances have had their brains wired to accept 'moddies,' behavior modules that can be chipped in to give the wearer an entirely different set of skills or personality. One day, someone Marid is conducing business with is murdered and Marid finds himself caught up in a complex web of intrigue and death. This is a fine, gritty, violent novel borrowing equally from the cyberpunks and Raymond Chandler." - Anatomy of Wonder (2004) II-363. 1988 Hugo nominee. The first Budayeen novel, followed by A FIRE IN THE SUN (1989) and THE EXILE KISS (1991). Sargent, British and Utopian Literature, 1986-2009. A fine copy. (#22086) (Inventory #: 22086)
$100.00 add to cart or Buy Direct from L.W. Currey
Share this item
L.W. Currey Inc.
Offered by