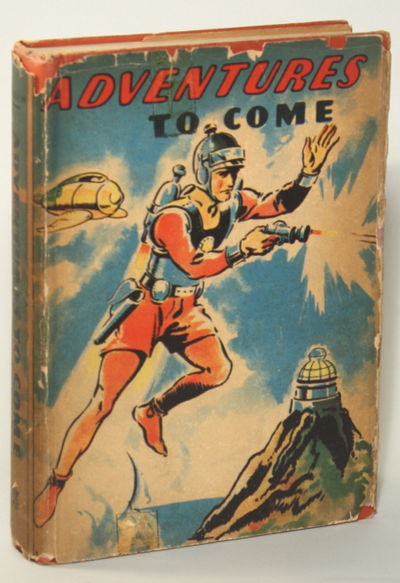 by Esenwein, J[oseph] Berg (editor)
Springfield, Mass.: McLoughlin Bros. Inc., 1937. Octavo, pp. [1-12] 13-187 [188-192: bank] [note: first two and last two leaves are blanks used as front and rear paste-downs and free endpapers], Tipped in color frontispiece and other full-page illustrations in the text by H. G. Nicholas, original red boards, front and spine panel stamped in black. First edition, first printing. A collection of nine science fiction stories by Berger Copeman, Jack Arnold and others published as part of the publisher's "World of Adventure Series," an anthology series for young readers. "Considered by many to be the first actual science fiction anthology." - Tuck, Encyclopedia of Science Fiction and Fantasy Through 1968, p. 160. "The usually accepted candidate as the first sf anthology is Adventures to Come... It was also sf's first original anthology - i.e., its stories were all previously unpublished - but they were by unknowns, and it seems the anthology had no influence at all." - Clute and Nicholls (eds), The Encyclopedia of Science Fiction, p. 38. Bleiler (1978), p. 69. Reginald 04940. A near fine copy in very good four-color pictorial dust jacket (depicting Buck Rogers in action) with shallow chipping at edges, mainly head and tail of spine panel and along flap folds, and several small tape mends. A superior copy of a very fragile book. The first printing, measuring 8 1/2 by 6 1/4 inches, is very scarce and is rarely found in jacket. Formerly author / editor / publisher Donald A. Wollheim's copy with his name stamped in ink on rear free endpaper. (#21833) (Inventory #: 21833)
$350.00 add to cart or Buy Direct from L.W. Currey
Share this item
L.W. Currey Inc.
Offered by