MR. EAST'S EXPERIENCES IN MR. BELLAMY'S WORLD: RECORDS OF THE YEARS 2001 AND 2002 ... Translated from the German by Mary J. Safford 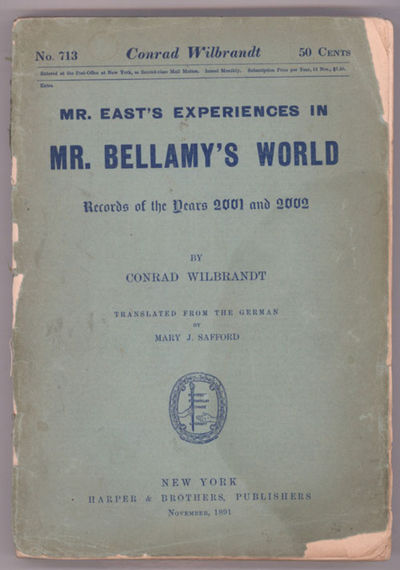 by Wilbrandt, Conrad
New York: Harper & Brothers, 1891. Octavo, pp. [i-iii] iv [v-vi] [1] 2-255 [256: blank] [257-264: ads], original blue-gray wrappers printed in dark blue. First edition in English. Translation of DES HERRN FRIEDRICH OST ERLEBNISSE IN DER WELT BELLAMY'S: MITTEILUNGEN AUS DEN JAHREN 2001 UND 2002 (1891). Published as part of "Harper's Franklin Square Library, New Series," number 713, November 1891, at 50¢. Apparently there was no hardbound issue. "An experiment in suspended animation goes wrong and the experimenter awakens in Bellamy's world. Despite his previous interest in Bellamy's program, he rapidly becomes disillusioned upon seeing its realization. The idealistic situation described in Bellamy is simply not true, and, rather than improving the lot of man, this new socialist state has restricted him even more. He has lost his liberty: 'Though society alone is ruler he is still a slave because he has not free will, free decision, free movement.' The arguments are, as Parrington (American Dreams, 1947), points out, 'the conventional arguments against socialism;' but as Parrington goes on to note, this is 'the most rational of the satires aimed at LOOKING BACKWARD.'" - Lewis, Utopian Literature, pp. 209-10. "It is probably the best critique of Bellamy from an economic point of view." - Bleiler, Science-Fiction: The Early Years 2383. Locke, A Spectrum of Fantasy, p. 231. Negley, Utopian Literature: A Bibliography 1193. Bleiler (1978), p. 208. Reginald 15311. Lexikon 1, p. 274. See Bloch (2002) 3400. Shallow chips from fore and bottom edges of front cover, some chipping to spine panel, lacks rear cover, a very good copy. Text block printed on god quality paper, but the wrappers are pretty fragile and this somewhat chipped at edges. Scarce. (#96063) (Inventory #: 96063)
$450.00 add to cart or Buy Direct from L.W. Currey
Share this item
L.W. Currey Inc.
Offered by