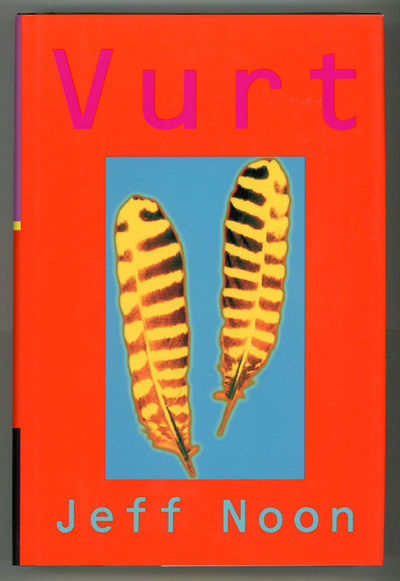 by Noon, Jeff
New York: Crown Publishers, 1995. Octavo, cloth-backed boards. First U.S. (and first hardcover) edition. "Noon's first publications as an SF writer comprise the Vurt sequence comprising VURT (1993), POLLEN (1995), AUTOMATED ALICE (1996) and NYMPHOMATION (1997), all set in various versions of a near-future Manchester irradiated by cyberpunk marriages of the human and non-human, all tales being told in a slapstick gonzo, mean-streets idiom and featuring a driven (though occasionally tangled) narrative line. VIRT itself is a reality-shifting drug and/or video-game, which destabilizes the perceptions of the cast, who may be accessing one virtual reality world, or many. VIRT won the 1994 Arthur C. Clarke Award; Noon also won the John W. Campbell Award for best new writer in 1995." - John Clute. SFE (online). "The novel resembles nothing as much as an episode of 'Scooby Doo,' written by William Burroughs ... Noon writes poetically, rhapsodizing broken glass, dog dirt and the filth of Manchester." - Butler, The Pocket Essential Cyberpunk, p. 66. Noon, who wishes to be thought of as the man who reintroduced 'whimsy' into English fiction, refers to his literary output as "like kid's stories ... but with weird sex and drugs thrown in." Anatomy of Wonder (2004) II-813. Sargent, British and American Utopian Literature, 1986-2009. A fine copy in fine dust jacket. (#93533) (Inventory #: 93533)
$75.00 add to cart or Buy Direct from L.W. Currey
Share this item
L.W. Currey Inc.
Offered by