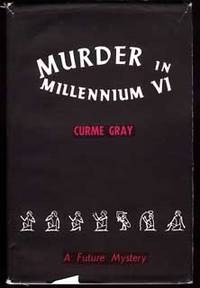 by Gray, Curme
Chicago: Shasta Publishers, 1951. Octavo, cloth. First edition. One of an undetermined number of subscriber's copies signed by Gray on front free endpaper. The author's first (only?) published novel. A "complex SF novel" in which "a homicide case shakes a matriarchal dystopia thousands of years hence into the near far future -- murder being inexplicable to the inhabitants of this world. The focus of interest in the novel is the gradual unveiling of the fact that a slow transition -- not back to patriarchy but to some synthesis -- is under way." - SFE (online). A "murder in matriarchal society that has 'forgotten' death provides mystery story to describe world of big, flat-chested women, small men, and food pills in fascinating scenario of alternate Earth." - Anatomy of Wonder (1987) 3-180. Discussed by Damon Knight (In Search of Wonder, pp. 121-125) who concludes: Gray's future world, where it's visible, is a masterly job -- and the picture carries conviction even where (perhaps because) it's incomplete." Sargent, British and American Utopian Literature, 1516-1985 (1988), p. 240. A fine copy in nearly fine dust jacket with light wear along overlapping top edges and 10 mm closed tear at upper front corner tip. (#75993) (Inventory #: 75993)
$100.00 add to cart or Buy Direct from L.W. Currey
Share this item
L.W. Currey Inc.
Offered by