THE EARL OF HELL 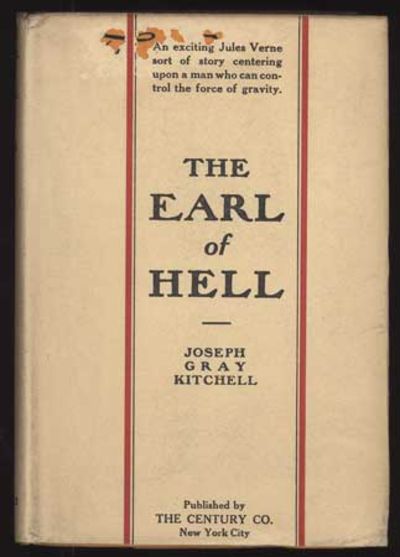 by Kitchell, Joseph Gray
New York & London: The Century Company, 1924. Octavo, pp. [1-6] [1-2] 3-325 [326-330: blank] [note: first and last two leaves are blanks], original orange cloth, front and spine panels stamped in black. First edition. A scientist compounds an antigravity material which is stolen by a foreign power. An overused theme by the 1920s. However, the novel is "unusual in stressing physical properties of the metal and its commercial exploitation, rather than using it as a device for adventures. As fiction, routine work, although the author seems to be better versed in the physical sciences than most authors who wrote about radium at this time." - Bleiler, Science-Fiction: The Early Years 1236. Clarke, Tale of the Future (1978), p. 51. Bleiler (1978), p. 115. Reginald 08299. Smith, American Fiction, 1901-1925 K-299. Several light creases to cloth along bottom edge of front cover, a bright, near fine copy in near fine printed dust jacket with several small chips near upper edge of front panel. A nice copy. (#107824) (Inventory #: 107824)
$150.00 add to cart or Buy Direct from L.W. Currey
Share this item
L.W. Currey Inc.
Offered by