THE GERM GROWERS. AN AUSTRALIAN STORY OF ADVENTURE AND MYSTERY. By Robert Easterley and John Wilbraham [pseudonym] .. 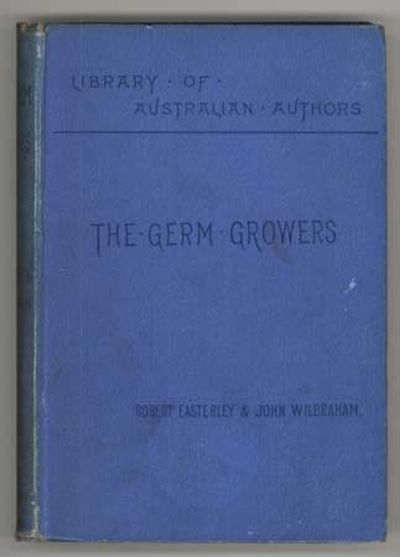 by Potter, Robert, writing as "Robert Easterley and John Wilbraham.
Melbourne: Melville, 1892. Octavo, pp. [i-v] vi [1] 2-274, original medium blue cloth, front and spine panels stamped in dark blue. First edition, Australian issue. The Australian issue utilizes the same sheets as the British issue with signature [A] replaced. Among the earliest novels to postulate an invasion of earth by malignant aliens. "The two most imaginative and colorful of the early [Australian] romances were THE LAST LEMURIAN: A WESTRALIAN ROMANCE (1898) by G. Firth Scott and THE GERM GROWERS (1892) by Robert Potter... Potter's THE GERM GROWERS more closely resembles the SF of today. It is probably the world's first story of an alien invasion, produced in Melbourne six years before H. G. Wells's THE WAR OF THE WORLDS. Shape-shifter aliens establish bases in wilderness areas of Earth, including northwest Australia. Unlike the Martians of Wells's book, they do not resort to open warfare with vastly superior technology, but use airships, invisibility, and biological weapons. While exploring the Kimberleys, two English youths stumble upon a plot by the aliens to destroy humanity through the breeding of new forms of plague. At first the conspirators appear merely to be members of some secret society, but it is soon revealed that they are nothing less than devils from outer space (their leader being Signor Niccolo Davelli). The heroes refuse to work for these disease-disseminating devils, and good triumphs over evil when they are rescued by an angel. As in much modern 'aliens among us' SF, the world remains blissfully unaware of the danger by the novel's end because another more benevolent race of aliens steps in to keep the peace." - Blackford, et al., Strange Constellations: A History of Australian Science Fiction, pp. 14-6; 227. "History as an occult battle between two races for humanity." - Suvin, Victorian Science Fiction in the UK, p. 50. "A literate, pre-Wellsian novel with considerable imagination." - Bleiler, The Guide to Supernatural Fiction 1227. Bleiler, Science-Fiction: The Early Years 646. Locke, A Spectrum of Fantasy, p. 177. Locke, Voyages in Space (2011) V 547. Sargent, British and American Utopian Literature, 1516-1985, p. 96. Teitler and Locke, By the World Forgot (2013) 988. Bleiler (1978), p. 160. Reginald 11836. Miller and Macartney, (1956), p. 383. Cloth rubbed at spine ends, corner tips, and along outer joints, spine panel a bit darkened, some foxing and darkening to endpapers, a very good copy. Still a nice copy and better than most extant copies. (#110244) (Inventory #: 110244)
$850.00 add to cart or Buy Direct from L.W. Currey
Share this item
L.W. Currey Inc.
Offered by