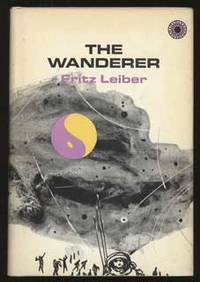 by Leiber, Fritz
New York: Walker and Company, 1970. Octavo, boards. First U.S. hardcover edition. Signed inscription by Leiber to one of his book editors on front free endpaper. The Wanderer, a planet-sized starship, makes a sudden appearance near Earth's moon. It causes flooding, earthquakes and volcanic eruptions on Earth, and millions of the planet's inhabitants die. After breaking up the Moon for fuel and a battle with the Stranger, a much larger police planet, the Wanderer disappears into hyperspace, its quest unresolved, its ultimate fate unknown. "Long, talky and enduring -- possibly Leiber's best SF work." - Pringle, The Ultimate Guide to Science Fiction, second edition (1995), p. 408. Winner of the 1965 Hugo award for best novel. Anatomy of Wonder (2004) II-654. Clarke, Tale of the Future (1978), p. 156. Pringle, Science Fiction: The 100 Best Novels 45. Survey of Science Fiction Literature V, pp. 2396-2401. A fine copy in nearly fine dust jacket with light tanning, mainly to spine panel and flap folds, and several small areas of light dust soiling. A nice copy of a scarce edition of this book. (#106941) (Inventory #: 106941)
$650.00 add to cart or Buy Direct from L.W. Currey
Share this item
L.W. Currey Inc.
Offered by