A PARTY OF BACCARAT .. 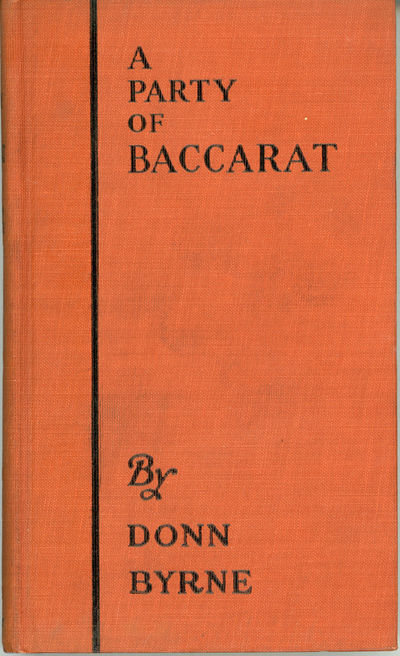 by Byrne, Donn (Brian Oswald Donn Byrne)
New York, London: The Century Co., 1930. Octavo, pp. [i-iv] v-x [xi-xii] [1-2] 3-212, four inserted plates with illustrations by Arthur William Brown, original brown cloth, all panels stamped in black. First U.S. edition. Published a few days earlier in the UK by Sampson Low, Marston & Co. Ltd. as THE GOLDEN GOAT. A short novel. The author was born in Brooklyn, grew up in Ireland, then moved back to New York to pursue a literary career, hitting the big time in 1920 with MESSER MARCO POLO. He lived beyond his means and made enemies easily, deriding America on the one hand, but being derided in turn by others as a "professional" Irishman. He died before he was 40. (See Kunitz and Haycraft, Twentieth Century Authors, p. 232-233.). BAL 2313. A clean, bright, near fine copy. (#119402) (Inventory #: 119402)
$25.00 add to cart or Buy Direct from L.W. Currey
Share this item
L.W. Currey Inc.
Offered by