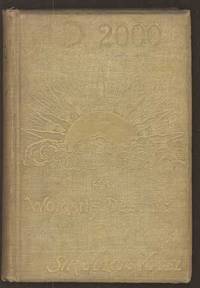 by Vogel, Sir Julius
London: Hutchinson & Co., 1889. Octavo, pp. [i-vii] viii [1-3] 4-331 [332: blank] [333-336: ads], original bevel-edged pictorial tan cloth, front and spine panels stamped in gold, t.e.g., black coated endpapers. First British edition. The colonial issue preceded this Hutchinson domestic issue by several months. 2000 copies of colonial issue and 1500 copies of English issue were published, of which this is one of 1000 hardbound copies (500 in were issued in paper covers). Of the two known variant domestic cloth issues, this one does not have the inserted frontispiece (a photographic portrait of Vogel), the top edge is gilded, and the bevel-edged pictorial tan cloth shows the Sun rising through clouds on the front cover. Utopian romance of a world of the future managed by female politicians (the president of the United States is a 35-year old woman), written by a British politician who drew upon his experience as prime minister of New Zealand. "Science fiction novel giving a panoramic view of the British Empire of the future, politically, sociologically and scientifically ...." - Locke, A Spectrum of Fantasy, p. 220. Blackford, et al., Strange Constellations: A History of Australian Science Fiction, pp. 30-1; 229. Bleiler, Science-Fiction: The Early Years 2270. Negley, Utopian Literature: A Bibliography 1143. Sargent, British and American Utopian Literature, 1516-1985, p. 83. Suvin, Victorian Science Fiction in the UK, p. 40. Bleiler (1978), p. 200. Reginald 14711. Scattered foxing to preliminary and terminal leaves, cloth a bit dusty, a very good copy. A superior copy of this book. First printing copies are scarce and seldom found in decent condition. (#108348) (Inventory #: 108348)
$650.00 add to cart or Buy Direct from L.W. Currey
Share this item
L.W. Currey Inc.
Offered by

THE ULTIMATE EGOIST. VOLUME I: THE COMPLETE STORIES OF THEODORE STURGEON. Edited by Paul Williams ..