UPROAR IN THE VILLAGE ... Translated by Evelyn B. G. Stamper and E. N. Hodgson .. 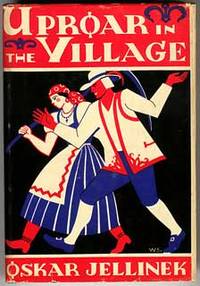 by Jellinek, Oskar
New York: Robert M. McBride & Company, 1933. Octavo, pp. [3-10] 11-258 [note: text complete despite gap in pagination], woodcut illustrations by William Siegel, original pictorial paper-covered boards with blue cloth shelf-back, spine panel stamped in black, pictorial endpapers. First U.S. edition. A translation of three short novellas set among in the peasant world of Moravia, all having to do with murder -- and perhaps more. The jacket blurb compares this work to that of de Maupassant and Poe. "Never has the finger of Nemesis been used more skillfully or remorselessly than by this new master of the short story, Oskar Jellinek." Jellinek (1886-1949) was a Czech who wrote in German. This seems to be his only work translated into English, a translation of DER BAUEMRICHTER," according to Hubin (1994), p. 441, who cites the British edition published by Butterworth in 1932. Touch of rubbing along lower edges of the boards, else a fine copy in near fine pictorial dust jacket. Uncommon. (#75750) (Inventory #: 75750)
$100.00 add to cart or Buy Direct from L.W. Currey
Share this item
L.W. Currey Inc.
Offered by