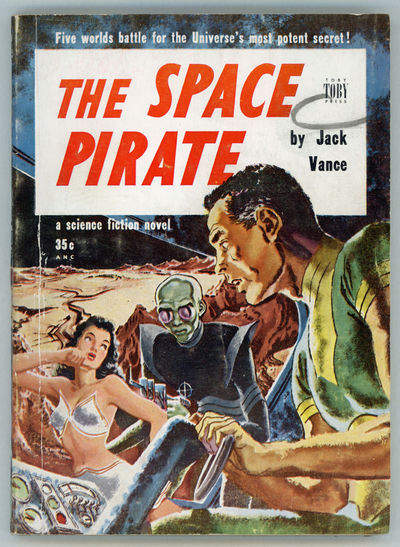 by Vance, John Holbrook, writing as "Jack Vance.
[New York]: A Toby Press Book, 1953. Octavo, pp. [1-2] 3-128, pictorial wrappers. First edition. Toby Press [no. 2]. The author's second book. Space Opera set in the future in which Paddy Blackthorn, an "Earther," set out to steal the secret of the interstellar space drive from The Sons Of Langtry, genetically altered descendants of the drive's inventor. "A simple quest story centered around five gold rings or bracelets owned by the rulers of the Galaxy." - Pringle, The Ultimate Guide to Science Fiction (), p. 138. Reprints are titled THE FIVE GOLD BANDS. Reginald 14465. Small faint circular felt tip pen mark on front cover, faint vertical crease along left edge of front cover, several creases to rear cover, latter most likely manufacturing flaws as this is an otherwise near fine, unread copy. (#86682) (Inventory #: 86682)
$45.00 add to cart or Buy Direct from L.W. Currey
Share this item
L.W. Currey Inc.
Offered by