A FORTNIGHT IN HEAVEN: AN UNCONVENTIONAL ROMANCE 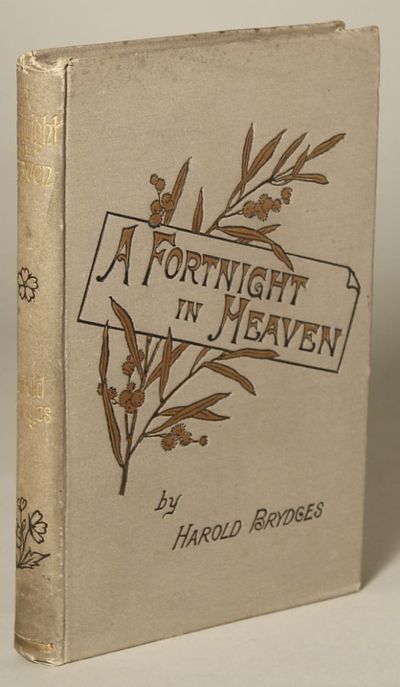 by Brydges, Harold (pseudonym of James Howard Bridge)
New York: Henry Holt and Company, 1886. Octavo, pp. [i-v] vi-vii [viii] [1] 2-177 [178-180: blank] [note: last leaf is a blank], flyleaves at front and rear, original decorated gray cloth, front panel stamped in brown and black, spine panel stamped in black and gold, floral pattered endpapers. First edition. "Light satirical romance of the adventures of one Captain Grizzle. Able to propel his spirit about at will, he visits the planet Jupiter [one hundred years in the future], which he finds to be an enlarged version of Earth; an exact counterpart, in fact, with Britain, America, etc. featured, but with somewhat advanced technology, including airships." - Locke, A Spectrum of Fantasy, p. 42. Bleiler, Science-Fiction: The Early Years 289. Locke, Voyages in Space 44. Bleiler (1978), p. 33 (citing the first British edition of the same year from Sampson Low). Reginald 02085 (also citing the Sampson Low edition). Wright (III) 667. Touch of rubbing to spine ends, some light scattered foxing to preliminaries and fore-edge of text block, a near fine copy. A very uncommon American eccentric interplanetary novel. (#107035) (Inventory #: 107035)
$450.00 add to cart or Buy Direct from L.W. Currey
Share this item
L.W. Currey Inc.
Offered by