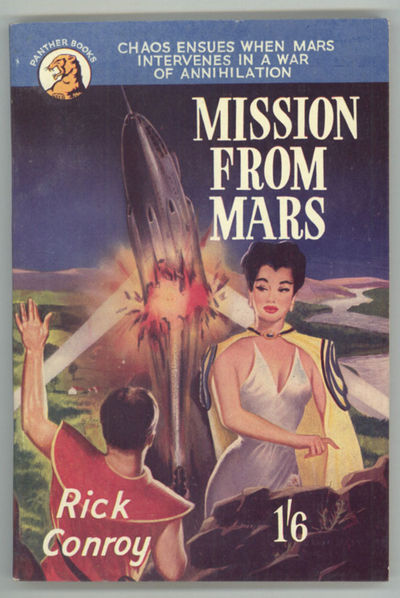 by Conroy, Rick (pseudonym)
London: Printed in Great Britain and Published by Hamilton & Co. (Stafford), 1952. Octavo, pictorial wrappers. First edition. Panther Books 00. "A young Martian and his girlfriend desire to reform Earth to a point where the more thoughtful Martians no longer feel it necessary to exterminate Mankind in self-defense. They bring with them a gadget that destroys all metals except gold and after trying the device on a few battlefields, succeed in destroying all the metal in most of Europe. This stops the major European war, but starts a civil war in England, with the Nobs and Spivs on one side, and the Reds (Working Classes) on the other. This minor brawl reveals facets of character in Homo sapiens which other Martians accept as sufficient reason to allow him to survive. Essentially a lighthearted satire, an oddity for this period." - Harbottle and Holland. Clarke, Tale of the Future (1978), p. 87. Harbottle and Holland A90. Reginald 03320. A fine copy. (#86707) (Inventory #: 86707)
$100.00 add to cart or Buy Direct from L.W. Currey
Share this item
L.W. Currey Inc.
Offered by